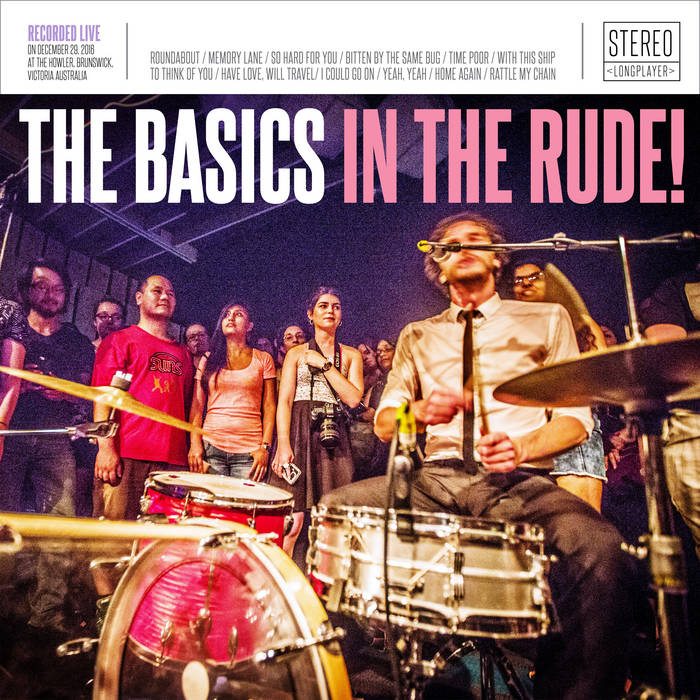 "The Basics Deliver to the World a Reason to Live, via Live Masterpiece In The Rude!"

The greatest computer language-themed rock band since Joe Satriani’s Javascript Orchestra, The Basics bring you 'In The Rude!', a vital document of the transcendent aural and spiritual experience that is a live Basics performance. Anyone listening to 'In The Rude!' will go “back to Basics” in more ways than one – not just in the sense of that incredibly clever pun, but in the sense that what we have here is music that drills down to something fundamental in the human soul. For within us all is a primal part which seeks out the electrifying feels of abandoning oneself to the music, that part that has been starved of nourishment in the years since the gods of rock ‘n’ roll left us – gods in whose footsteps The Basics still walk in: The Beatles, the Stones, The Clash, The Seekers. Luckily The Basics will never leave us: above all else, In The Rude! is an enduring love letter to the listening public; a missive that says, we love you, we are with you always, we will be ringing in your ears till the day you die. And on that day we will die happy, because we have known The Basics. Without resorting to hyperbole, this is an album that only irredeemable cretins could possibly not want to own.

Since 2002 people around the world have been asking, what is The Basics’ secret? How do they create the peculiar magic that makes these feet move, this heart swell, and other pieces of anatomy engorge in unspeakable ways? And, clearly, one of the biggest factors in their unique blend of brilliance and amazingness is the fact that they chose to be the ideal number of people for a band. Hendrix knew it, Cream knew it, Rush knew it: three people is how many people should be in a band. As The Carpenters showed, two is not enough, while The Beatles proved that four is just showboating. But with a lean, mean, pristine three, The Basics achieve a sound at once efficient and colossal. But not only have they achieved numerical perfection, the form these three take is stunningly on-point: Kris Schroeder, Wally de Backer and Tim Heath have cannily decided to organise their band around guitar, bass and drums, a format that proves far more effective than, for example, three bass players, two drums and a xylophone, or three men all playing the same cello.

It’s that guitar, bass and drums that on 'In The Rude!' make a racket so sublime, so unmatchably intoxicating, that it could make strong men weep and weak men skydive. The album kicks off with “Roundabout”, a song that sounds like Bo Diddley fertilised a clutch of eggs laid by Paul McCartney and the hatchlings were raised by Tom Petty and his wife Ray Davies – or to put it another way, it kicks arse. The arse-kicking refuses to let up for thirteen infectious, raucous, rollicking, haunting, ear-fondling blasts of indelible rock and/or roll. From honeyed harmonies on “Memory Lane” to The-Police-Wish-They’d-Written-This reggae-snap on “Bitten By The Same Bug”; from the sardonic punk stutter of “Time Poor” to the gunslinging highway roar of “Have Love, Will Travel”; all the way to the triumphant finale of “Rattle My Chain”, with its howling storm of gut-punching, purebred rock; In The Rude! is the call to arms you can’t resist, the fever you can’t sweat out, the bus you can’t get off no matter how many times you hit the button.

Fifteen years of Basics’ musical sorcery is summed up on 'In The Rude!', an album that future generations will look back on and wonder, “how could real-life humans make something so heartbreakingly wondrous?” while past generations look forward and lament that until 'In The Rude!' is released their lives have no meaning. If you’re not on board the Basics Ferry yet, it’s time you got down to the pier.